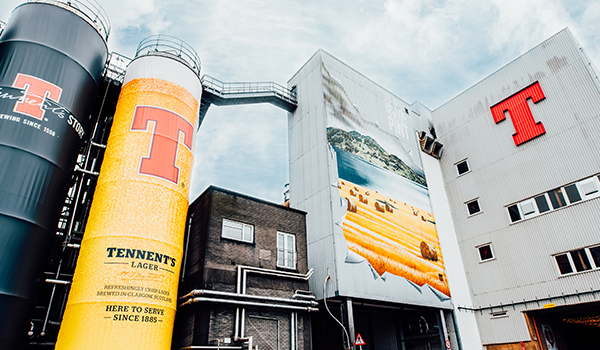 Tennent’s is Scotland’s oldest continuing commercial concern and  Tennent’s Lager, famous as Scotland’s best-selling beer, is rightly acknowledged as a “fabric brand” of the nation. Only ever brewed at Wellpark and made with the finest Scottish malted barley and fresh highland water from Loch Katrine, Tennent’s Lager is the No.1 drink by sales in Scotland. Available in over 8 out of 10 on trade (pubs, bars, clubs and restaurants) outlets, Tennent’s Lager has the highest rate of sale of any beer brand in the UK and is available in over 60 countries, with the red ‘T’ more recognisable among Scottish adults, than the McDonalds Golden Arches and the Nike swoosh.

Among its efforts to support and champion its local community which includes supporting young workers through apprenticeship schemes, sourcing ingredients and resources from local businesses and focusing on alcohol responsibility, Tennent’s has also committed to ongoing environmental initiatives to tackle the climate crisis. Some of these intiatives include:

Tennent’s anaerobic digestion plant at Wellpark Brewery has been operational since October 2019, allowing for on-site treatment of wastewater generated by the brewing process. This has improved the quality of wastewater discharged from Wellpark into the water treatment plant at Dalmarnock in Glasgow by 90%. The plant also generates bio-gas which provides around c. 8% of the energy used to heat the brewery rather than pulling energy from the national grid.

Out of Single Use Plastics

In 2019, Tennent’s announced its ‘Out of Single Use Plastics’ project; a £7m investment in packaging equipment at Wellpark Brewery that has seen  the organisation remove single use plastic from the packaging of its canned products. The investment, announced as part of a series of ‘Because Life is Bigger than Beer’ initiatives, will remove 150 tonnes of plastic from the environment each year, including more than 100 million plastic (hi- and mid-cone) rings.

The installation of an innovative carbon capture facility at Wellpark Brewery has seen the production of Tennent’s Lager become self-sufficient in CO2. The £2.6m facility has been operational since November 2020 and is the biggest in Scotland, consisting of two 25-tonne tanks that allow the brewery to store over 4,200 tonnes of CO2 per year – the equivalent of 27,000 return flights from London to Glasgow.

Other ways Tennent’s is tackling the climate crisis at its Wellpark Brewery include reducing water consumption by 7 million litres per annum through the recovery and re-use of bottle rinse water, implementing a waste hierarchy approach meaning zero waste is sent to landfill, and powering the brewery with 100% renewable sources.

Read how Tennent’s is saying goodbye to single use plastic

Want to learn more about how our Glasgow Chamber members are committing to positive climate action? Visit our Instagram page for our daily #sustainabilitystories.