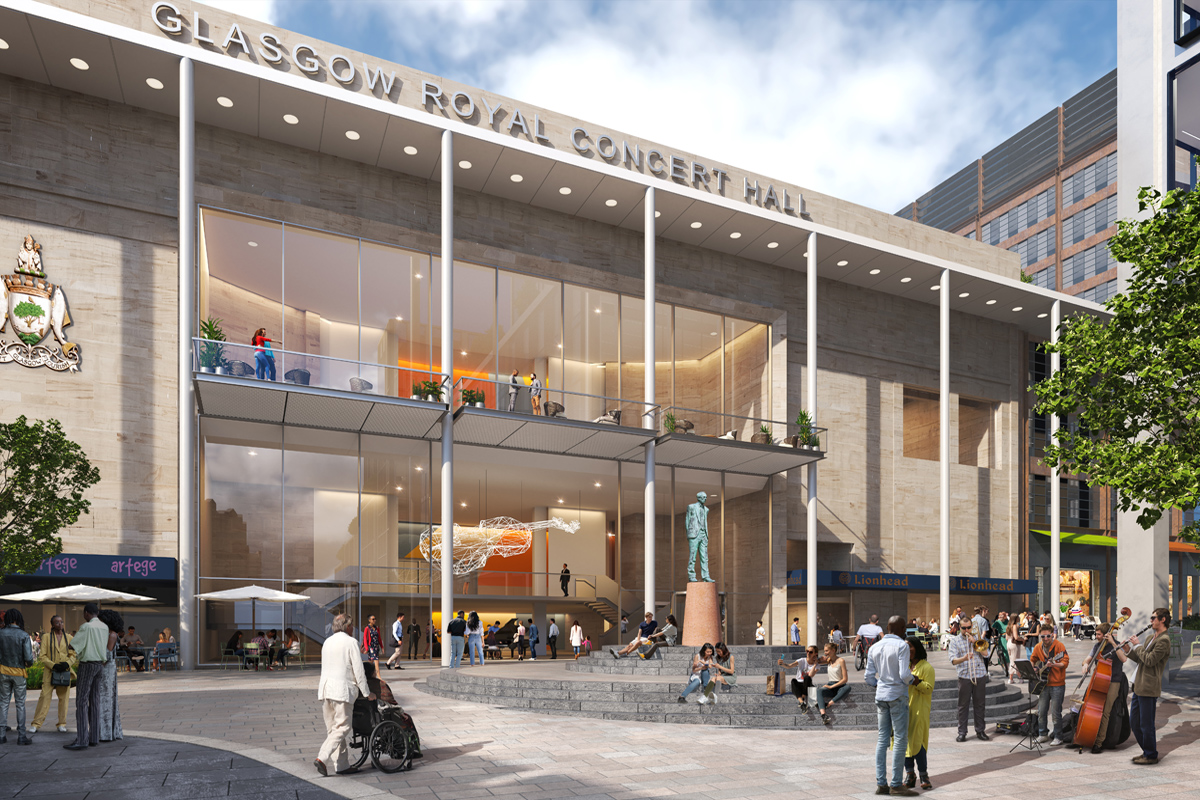 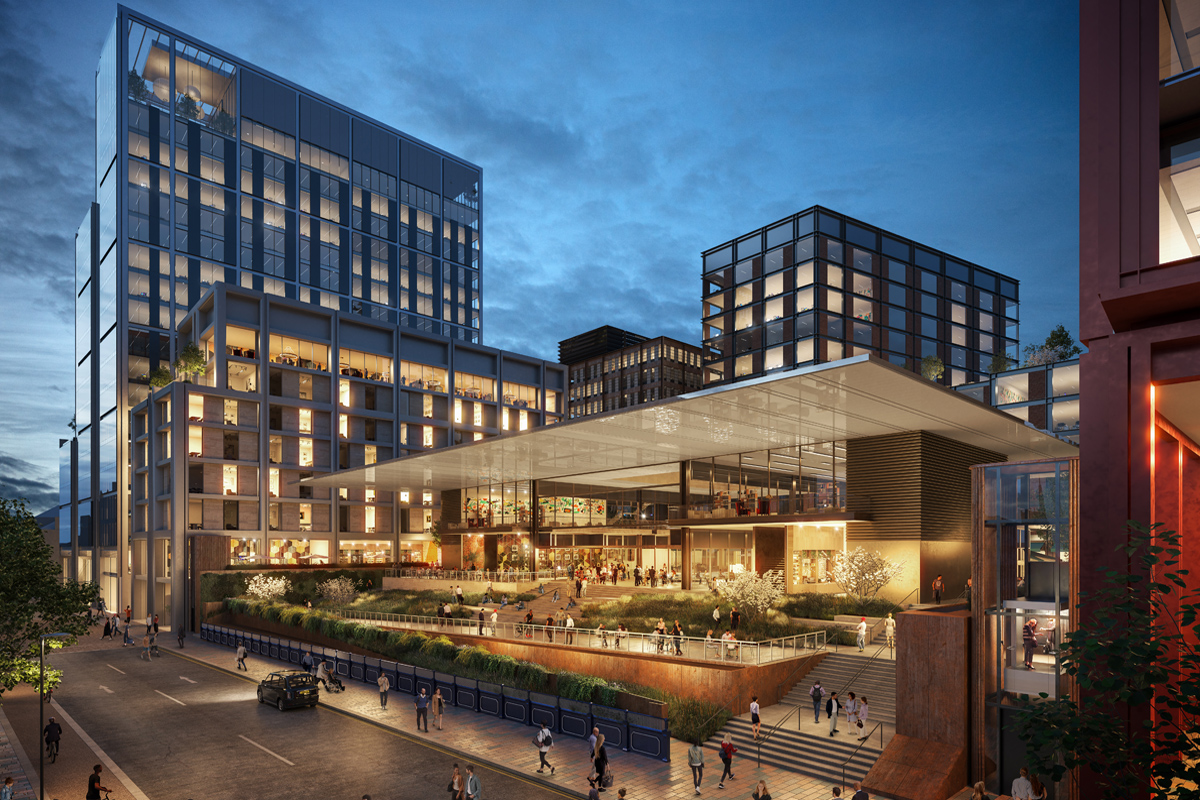 New CGI imagery has been released by Landsec to mark the third stage of their consultation on the future of Buchanan Galleries. The images reflect how the proposals for key parts of the development have evolved following extensive consultation with the public, local community, and other city groups and businesses.

Feedback from the second stage of consultation demonstrated a desire for the plans to boost the day and night-time economies in the city and accommodate world-class shopping and a diverse mix of places to live, work and play. The proposed masterplan will support Glasgow’s future in creating a vibrant district in the heart of the city. The development aims to enhance the overall experience for visitors to the city centre, reintroduce a variety of flagship and independent shops and restaurants into the site and improve access to the key transport hubs of Queen St station, Buchanan St bus station and Buchanan St subway.

A key element of the masterplan is the improvement and extension of fully accessible public spaces which will be enriched by trees and planting. Two key areas that will be tested with people taking part in the consultation are the creation of a new public park or building above the railway on Cathedral Street, and potential options to add a new and fully accessible street level entrance and gathering place at the Royal Concert Hall. The removal of Buchanan Galleries, which is currently joined to the Royal Concert Hall, would also allow for the extension of Sauchiehall Street to the east of the city, strengthening the iconic Glasgow grid and significantly improving connectivity and safety as people move around the area.

Evolving work by the expert design team has revealed that the removal of the Sauchiehall portion of Buchanan Galleries would result in a challenge in retaining the Royal Concert Hall steps in their current shape. However, Landsec fully recognise they serve as an important space for public gatherings, so the designers have carefully and thoughtfully proposed innovative options that include replacement steps with improved accessibility for all, which would also contribute to an overall increase in the amount of public space.

The designs also include the addition of a new public space to encourage more visitors into the heart of the city centre from across Glasgow, Scotland and further afield, supporting both local businesses and the wider community. Proposed options include the creation of an attractive public park or pavilion that would enable cultural and community events and activities to take place.

The plan will foster Glasgow’s global city status through driving job creation and meeting future business demand. The re-development will position Glasgow at the forefront of a sustainable social and economic future, whilst acting as a catalyst to enrich the neighbouring streets and wider city centre. Over 410 construction jobs could be created each year during the build phase leading to over 13,500 permanent jobs for the city centre. On completion this will result in over £1.5bn of Gross Value Added to the economy each year, demonstrating a significant benefit to Glasgow and Scotland. The plans will align with broader post-covid city centre recovery plans from Glasgow City Council and the Scottish Government.

To contribute to Glasgow City Council and Scottish Government net zero targets, environmental sustainability is at the heart of the masterplan vision. Plans to remove the existing car parking facilities will be incorporated into the proposal and will reclaim valuable space for the development, enable additional pedestrianised spaces and a better city centre experience for residents and visitors to ultimately help Glasgow become a greener, safer, and cleaner city. The plans will ensure blue badge holders remain catered for. Measures to accommodate electric vehicles and provide improved access to neighbouring carparks for those who require access will also be pursued.

Events and exhibitions including interactive workshops and drop-in sessions will kick-off from Thursday 26th January in the Retail Academy, Top Floor, Buchanan Galleries, and will be supported by online consultations. Full details of the Stage 3 consultation are set out at https://buchanangalleries.commonplace.is/

Nick Davis, Head of Retail Development, Landsec said: “We are committed to creating a new world-class environment in Glasgow to ensure the city continues to thrive into the future. This is the final opportunity for people to give feedback on key elements of the development, and we would encourage everyone to share their views and contribute to the third stage of the consultation.”

Councillor Susan Aitken, Leader of Glasgow City Council, said: “These new images illustrate the sheer scale of the transformation involved in the proposals for Buchanan Street. Glaswegians care about their built environment and want to have quality public spaces that respect and build on shared history, so it’s important they take the opportunity to help shape the change our city centre demands.”

Stuart Patrick CBE Chief Executive of Glasgow Chamber of Commerce said: “Glasgow is the engine of the Scottish economy, and this proposed development will support the city in rebuilding its competitive advantage, making a major contribution to post-covid recovery, and ensuring Glasgow remains an attractive and sustainable place in which to live, work, study, visit and invest.”